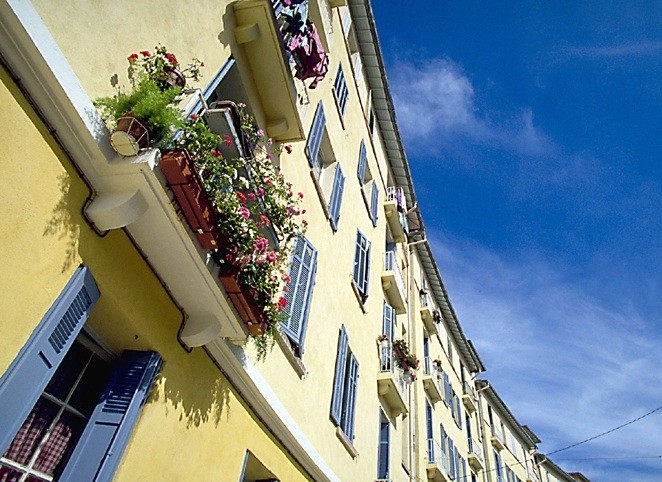 Made up of 84 double-oriented flats spread over 4 floors, this building is famous for its layout, which runs Boulevard Frédéric Mistral, following the curve of the historic centre’s ancient fortification. The façade consists of a single block, as if 8 main buildings had been pushed together and connected by hidden stairwells. No ornament or design interrupts the rhythm of the facade: the only creativity allowed was a darker coating on the ground floor, differentiating it from the other brighter floors. An archway was constructed at the very centre, leading to a beautiful courtyard decorated with a fountain and creating a pleasant area that is necessary for group housing.
It is a unique neighbourhood with original housing, representing our beautiful town.

Old Istres was built on a bank of limestone abundant in fossilised oysters. It consisted of a large hill with an oval 250m x 188m base that stretched from the north to the south, dominated by a large central eminence measuring 30 metres above sea level. It was a city perched on a rocky hilltop with rural Mediterranean-style houses.
Houses were built starting from the central castle and followed a concentric zone model. The city seemed to have reached its final size rather early since the outer wall was completed in 1379.
In the 16th century, Upper Istres was already in “ruins”. Having experienced a local economic growth during the 16th and 17th centuries, Istres started to expand and rebuild its entire area: most of the houses were constructed between the 16th and 18th centuries.

The outer wall, although partly falling into ruins and opened up for new passages into different neighbourhoods, apparently survived until the 18th century. Old Istres features several beautiful bourgeois homes; however, it is mainly a town of country dwellers. The angled walls and street corners remind us of this old farm town where carts had to be able to turn easily. Niches mark the Catholic fervour of Provence that was present up until the 19th century. In addition to farmers, many craftsmen and shopkeepers contributed to the life of Old Istres. Certain street names reflected specific trades (“Fabre”, blacksmith in Provençal, which comes from the Latin word “faber” meaning “craftsman”, is the origin of the famous street called “Rue des Fabre”) as well as lawyers, solicitors, schoolmasters, clergymen, children, the elderly, etc. An entire colourful world animated the streets of Istres during the Old Regime.

Today, the old centre is brought to life by the homes of Old Istres that have created an active and dynamic partnership, organizing many events.
In addition, tours of the old centre, a witness of our town’s historical past and development, are organised by the Tourist Office. You can visit it in a fun and entertaining way, with new unusual tours of the old centre during summer, by yourself with our “Istres, à travers son histoire” (Istres Throughout Its History) brochure, or with a tour guide by request. 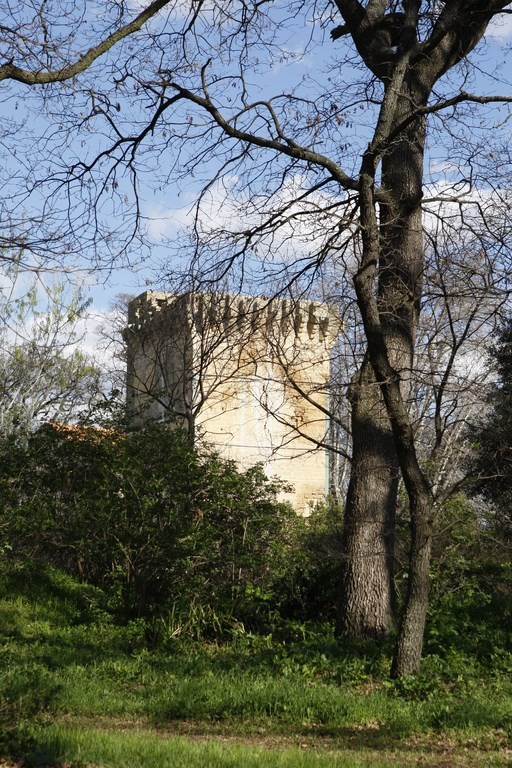 Entressen is an area of Istres included in the Canton d'Istres Nord region. It was Initially an independent town; however, that is no longer the case today. Nevertheless, this area of Istres still has its own postal code and local festivities.

Occupied during the Protohistoric period until the Late Antiquity, the town at the time was considered an oasis in the Crau: the pond and green areas were used as a place to rest. Around 200 years B.C., the Greeks built a large number of villas. Then, it was the Romans’ turn to enjoy this beautiful green area and spring. An ancient path crossing Entressen on the route from Arles to Martiques proves the presence of the Romans. Later, Entressen also became a key point over which Arles and Istres often argued.

From the 19th century, Entressen began to evolve, starting with the Avignon-Marseille railway, which is no longer in use today. Construction in the early 20th century and expansion of the air force base dramatically increased the city’s population. Entressen was once known for its typical Provençal farmhouses. These large houses were originally owned by people from Marseille and often used as hunting estates. With all of the changes that have been mentioned, Entressen has increased its population by 10. Today, there are nearly 5,000 inhabitants.

Many festive events take place every year such as the traditional “Fête du Foin” (Hay Festival) and “Fêtes d'Entressen” (Festivals of Entressen).

The areas of Heures Claires and Ranquet, built at the edge of the Étang de Berre, are made up of “cabanon” (small Provençal cabins) constructed to create a pleasant atmosphere and enjoy nature (fishing, swimming, lazing about, etc.). They were popular holiday spots where the “cabannoniers” lived according the theory: “Fai pas bon travaia quand la cigalo canto”* (*It’s not good to work when the cicada chirps)

Famous for its harbour, water sports centre and Saint Martin spring, the area of Heures Claires is perfect for talking pleasant strolls and swimming.
Organised by the city and the CIQ of Heures Claires, the “Fête du port” (Harbour Festival) and “Fête de l’eau” (Water Festival) occurring in late June are great examples of the dynamism of this typical area of Istres.

Nestled in a small green cove, 3km from Istres in the direction of Martigues, Ranquet has a small beach and the typical charm of a village with quaint cottages.

A supervised beach enables visitors to safely relish in the joys of swimming and includes a free car park, shower, WC, water fountain, floating pontoon and access to a bar restaurant that leads directly to the beach.

During summer, you can also enjoy the “Fêtes du Ranquet” (Festival of Ranquet) in mid-August and the city’s jazz festival in late July. 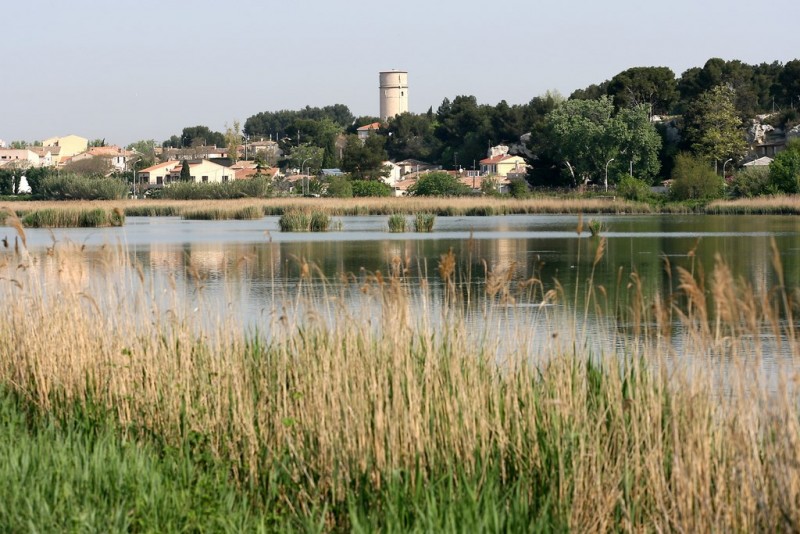 The “district” of Rassuen was created at the same time as its soda and chemical plant, built in 1808 on the saline of Rassuen, and fed by the Étang de Lavalduc. The directors of the factory then created the town around this plant and financially took care of all of the equipment and facilities necessary for the life of a half thousand people. It was also around this factory that the district and city would eventually grow and develop.

Thus in 1850, a chapel and primary school were financed and built by the manager of the plant at the time, Jean Jacques Prat, who eventually became mayor of the town in 1854 until 1860.

Rassuen’s railway station was founded in 1875 and is still used today. It is used to send the production of by-products manufactured by the plant such as sodium carbonate, sulphate, etc. to the entire region and especially to northern France.

In 1986, as a result of relocation, manufacturing was gradually brought to a halt. The 500 employees, of which over half were foreigners, were steadily laid off. In the absence of activity, the plant closed in 1988 and wascleaned up by the Produits Chimiques du Midi Company in 1999.

Alongside the history of this plant that marked the creation and development of the district of Rassuen, other infrastructures were gradually set up near this old 190 year-old industrial wasteland. The covered bowling pitch was opened in 1986 where regional tournaments occurred ten years later. In 1998, the local council set up a cultural area with a Concert Café known as “L'Usine”, designed by the architect Frédérik Rill, where several regional activities take place.

Today, the “Fêtes de Rassuen” (Festivals of Rassuen) and a variety of competitions and events that take place near the bowling pitch animate this neighbourhood, which marked the growth of the town.

Located 5km from Istres on Route de Miramas, the Domaine de Sulauze is a private estate situated in a beautiful green setting between vineyards and scrubland. This unique estate stretches to the Étang de l’Olivier over 650ha.

Part of the estate is used to raise Spanish fighting bulls and grow “foin de crau” (special AOC hay) while the other part is dedicated to winegrowing and the production of AOC Côteaux d’Aix wine. A brasserie was also recently set up on the estate.

The annual “Fête des Bergers” (Shepherds’ Festival) partly takes place at the Domaine de Sulauze in early December for the mass celebrated in the Provençal language, the blessing of the horses and the hot wine offered by the owner of the wine cellar. Ferrades (bull branding) and young cow races are organised for groups in the estate’s arenas.

Today, tours of the wine cellar and the estate’s bamboo garden are also organized by the Tourist Office as part of the “Un Eté à Istres” (A Summer in Istres) operation.