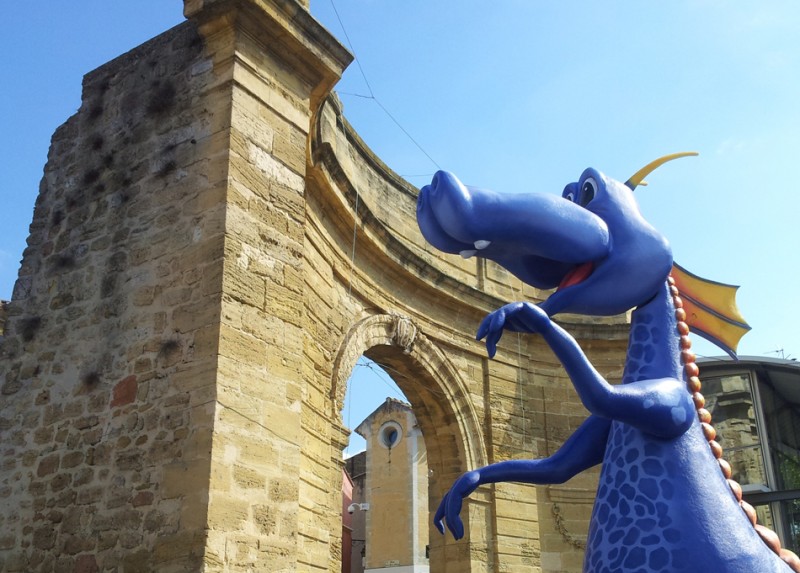 According to a very ancient legend, a monster, half dragon, half garter snake, name Lou Coulobre, was born and lived deep within the waters of the Étang de l'Olivier.

Although swallowed by the waters of the pond, the beast is still alive today in the minds of the people of Istres today!

The monster has truly left its mark on the city. At the corner of a small street, you can discover the fountain of four dragons with an enormous jet of water shooting up like the breath of Lou Coulbre. On sunny days, are we blinded by the reflection of the sparkling water or rather the monster’s silver scales? Is Lou Coulobre still alive? Who knows…

A Legend of Istres...

An ancient legend says, from time immemorial, when the men of Provence lived with the Gods of water and Crau in perfect harmony, at the time when Istres was just a small village, that a creature, half dragon half garter snake lived deep within the waters of the pond.

All afternoon, she listened to the song of a shepherd singing to his sheep. The shepherd’s voice and tone warmed the creature’s heart. Falling in madly love with him, she remained there for hours, hidden down behind the reeds.

One day, she surprised the young man who was in the middle of kissing his ladylove. As soon as she saw this woman, the creature became extremely jealous and furious. She could not contain her anger and as a monster full of rage, spit all of the fires of hell and devoured the romantic couple. For weeks, she terrorised the entire village, which resulted in a relentless battle between the inhabitants and the beast.

The people called on a young herdsman to come and fight the ferocious beast. Hypnotised and soothed by the music, the beast was then attacked by the herdsman.

Rescued, the people celebrated the herdsman and his courage and decided to leave this land that had cursed them behind. They settled on a small hill, between two ponds, the Étang de l’Olivier and Étang de Berre. Fearing a curse, they built a fountain with four dragons in order to drive out this dark and disastrous time.

However, some doubt the creature’s real death and say that Lou Coulobre is still alive…

Discover the official comic strip of Lou Coulobre that will soon be available in the Tourist Office.